"We Germans to this day call April ostermonat, and ôstarmânoth is found as early as Eginhart (temp. Car. Mag. **). The great Christian festival, which usually falls in April or the end of March, bears in the oldest of OHG remains the name ôstarâ ... it is mostly found in the plural, because two days ... were kept at Easter. This Ostarâ, like the [Anglo-Saxon] Eástre, must in heathen religion have denoted a higher being, whose worship was so firmly rooted, that the Christian teachers tolerated the name, and applied it to one of their own grandest anniversaries."


** Vita Karoli Magni (Life of Charles the Great) is a biography of Charlemagne, King of the Franks and Holy Roman Emperor, written by Einhard. 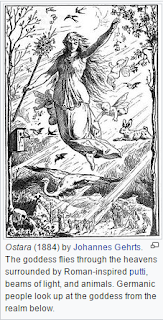